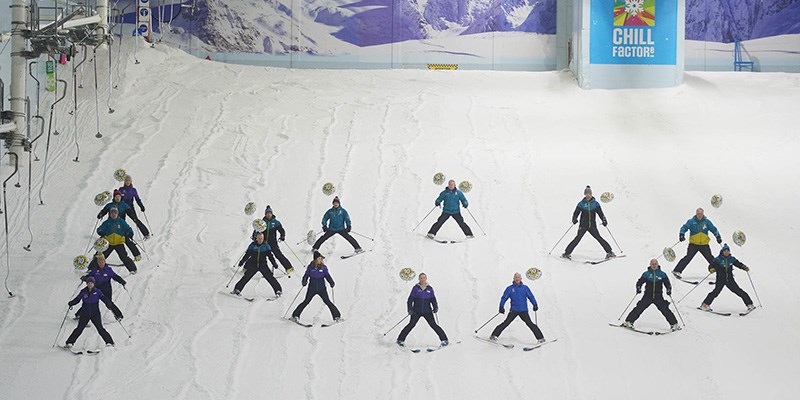 The event included a spectacular ski down led by the nation’s favourite, Eddie ‘The Eagle’ Edwards plus cake, cake and more cake!

Since opening in November 2007, we have welcomed over 14 million visitors and we are the home to the only Christmas Grotto on real snow in the country.

Over the last ten years, we have achieved some great things. Here are just a few facts we have collected over the last decade:

We are very pleased to be celebrating our 10th Birthday but we couldn’t have done it without our long standing employees who have worked for Chill Factore since day one and loyal guests who visited Chill Factore on it’s opening day. To mark this celebration, Eddie Eagle led a group of Snow Crew, Sponsored Atheletes and instructors in a special ski down in the formation of a number 10, followed by Chill Factore’s very own birthday party!

Over the years we have achieved World Record breaking status’… including achieving the longest chain of skiers in 2011, the greatest number of people to perform the same trick at a single venue in 2013 and the Greatest Distance Snowboarded Indoor in 24 hours by Richard Millington in 2014, who boarded a total of 46,200 metres – equivalent to skiing down the full height of Mount Everest over five times!

Here’s to another decade!