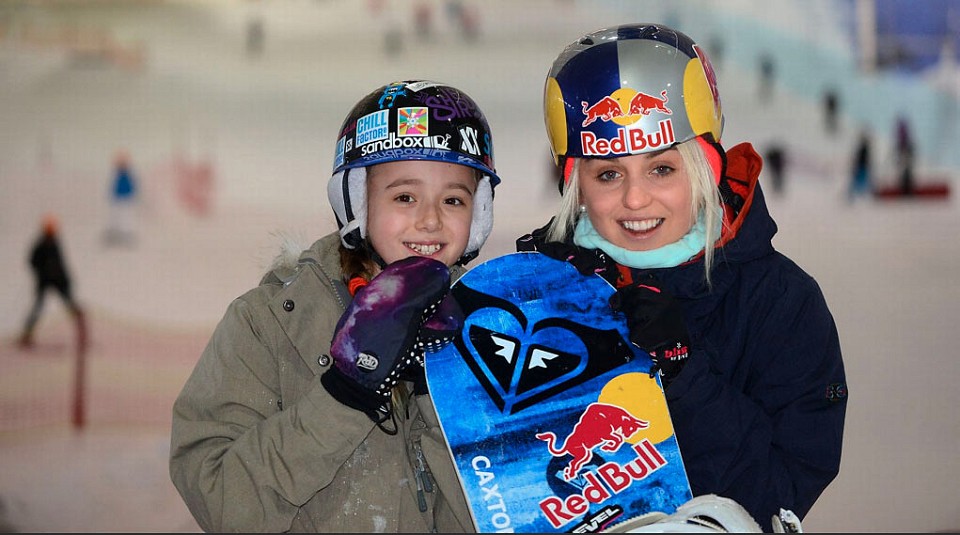 WOW, Friday 22nd October was such a great day!

I arrived at Chill Factore and went up to The Sports bar… as I walked in I saw AIMEE FULLER …. Eeeekkkk. I was so excited I knew Aimee was going to be at Chill Factore but had no idea that I would end up meeting her. We had a chat I asked her loads of questions about snowboarding and the Olympics.

The best part of the day was that I got to shred (ride) with Aimee as they took photographs of us on the pink box at the bottom of the amazing park Chill Factore had made.

I was very nervous at first who wouldn’t be, riding with an Olympian and their idol but then I got the better of my nerves and had a good play on the box. I did a 180 on and 270 rotations off the box. Aimee told me I was riding well and that I had actually inspired her to do a 270 off the box, a trick she had not done for ages. Aimee was doing some awesome front side - board slides.

After a while BBC radio 1 extra arrived and they did an interview with Aimee and filmed her teaching radio presenter Nick Bright how to snowboard. I watched her teach him for a while and then I rode alongside them. I had a fantastic day; Aimee even gave me three of her own stickers!

All of this would not have been possible if I had never tried snowboarding. I first decided to give it a go when I had some birthday money left from my 8th birthday… that was 2 years ago and I have never looked back.

I took a snowboard taster session at Chill Factore and really enjoyed myself so I begged my mum and dad to let me have more lessons. They gave in and off I went, every week for about 3 months until I was riding independently on the slope and loving every minute.

I was fascinated by watching people doing cool tricks on the slope as I was riding and decided I wanted to have a go. I started shred club at Chill Factore and was soon doing little kickers and boxes on a regular basis. Things developed I started freestyle lessons and then decided to start competing which is great fun and challenging at the same time. This May I applied to become a Chill Factore Sponsored Athlete…. I was over the moon when I heard I had been successful!

I am working really hard trying to do my sponsors proud. Riding at Chill Factore is great I have made loads of new friends, kids and adults, have a great time every time I ride and always learn something new. I have spent loads of time practising new tricks and techniques with my coach Dave Chapman and love my sponsored rider sessions with my other coach John Weatherly on a Wednesday night. None of this would have been possible without the awesome lessons on offer at Chill Factore!

Anyone that wants to give skiing or boarding a bash then I would definitely recommend it. Snowboarding is super fun, you get to meet super cool people and get fit as well. Boarding is great, so get on down to Chill Factore and have a ride!

Read the article Manchester Evening News wrote about us.