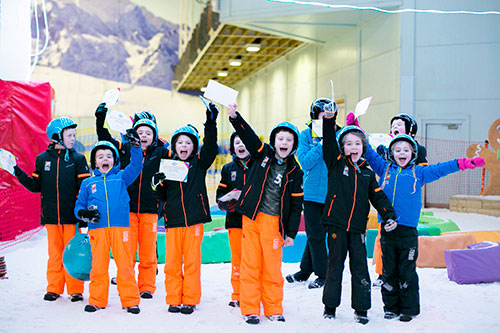 From social media platforms to smart gadgets, kids all over the UK seem to be becoming more involved with technology. But what effect is a close relationship with the digital world having on their social and physical health?

At Chill Factore, we offer lift passes, fun family days out, and skiing and snowboarding lessons for sports-fans of all ages — which is why we’ve decided to look into this issue and explore whether gadgets and technology really do influence our kids. Does technology cause poor communication skills and reduced physical activity? Or do gadgets actually help children keep in touch with friends and encourage fitness?

How children in the UK are engaging with technology

So, what is the situation currently in the UK regarding the use of technology among kids? Apparently, UK households have approximately 18 smart devices — which include TVs, mobiles and tablets —according to a Samsung survey, while other studies have found that iPad use will increase to 18.1 million users by 2019. These findings suggest that there are many opportunities for kids to engage with tech products, which is only going to grow.

In other research, the Broadcasters’ Audience Research Board (BARB) discovered that many homes have multiple TV sets, rather than just one that perhaps remains downstairs. As of the end of 2017:

TVs have been around for decades — so what about newer forms of technology? Smart speakers, including Google Home and Microsoft’s Cortana, are becoming ever more popular in the UK. In fact, research by Futuresource discovered that there was a 212% year-on-year increase of these gadgets across the world in in 2017, with the UK and US making up an approximate 89% of the market. Smart speakers are designed to provide fast and simple ways to attain information. Evidently, they’re handy and should help with kids’ learning — but do they also eliminate the necessity or desire to explore ideas and topics in depth. Could this affect a child’s ability to discuss ideas with friends, face to face?

Of course, the above data doesn’t mean that parents are allowing their kids unregulated time engaging with technology. However, it could imply that many children at least have regular access to several devices in their homes. But, the question is whether the availability of technology is a cause for concern, encouraging kids to ignore exercise and face-to-face socialising in favour of sedentary, tech-based activities…

It’s a well-worn argument that watching too much TV or playing too many online games impact negatively on physical health — but are there any positives regarding kids’ fitness and technology use? According to an Ofcom 2017 media use report:

Clearly, kids are spending many hours engaging with technology. Interestingly, less than 10% of parents state that their children (aged between 5-16 years) participate in the one hour a day of physical activity, which is the amount that the government recommends. If 60 minutes is essential to maintaining good physical health in children, could social media, online games, YouTube, smartphones, tablets, and other technology be reducing physical activity to a harmful level?

It may be possible that technology is not entirely to blame. To explore this idea, we’ll look at the use of technology in previous generations. According to The World Health Organization, the amount of obese youths aged 5-19 years has risen tenfold in the past four decades. Although we could also accuse diet and education of playing a part in this worrying figure, technology should arguably also be held partially accountable, as its influence and use have clearly grown during this time frame.

So, what are the positives of technology regarding children’s use? Surprisingly for some, there are many. For example; YouTube is a great platform for watching tutorial videos that can help kids practice a sport, while consoles like Nintendo Wii encourage physical movement. What’s more, there are many child-friendly apps for everything from yoga to running that are created to help get kids active. Plus, many after-school sports clubs run Facebook and Twitter accounts to persuade kids surfing online to join.

There are arguments for and against a child using technology, but there is no denying that positives can exist if technology is used correctly.

Is technology a curse or saviour of socialising among kids? Social media platforms can help kids to maintain relationships with friends, while programs like Skype allow tutors to speak with pupils and carry out lessons in a virtual classroom. Smartphones are also good for helping kids stay in contact with their parents when they’re out, while a report by Unicef found that technology helped kids improve their existing relationships with friends, as well as assisted those who struggled to socialise face to face.

Of course, with the news reports reading cyber bullying, many believe that using technology to socialise is a bad thing. Research conducted at Newcastle University discovered that primary school kids who watched up to three hours of TV a day were better communicators at secondary school. However, watching more than three hours was thought to lower linguistic skills. As poor communication can negatively impact on a child’s ability to make friends, take part in classroom activities, and promote themselves during interviews; this research is a cause for concern. According to the Ofcom report mentioned earlier:

At first glance, these statistics appear positive — apparently, kids aren’t watching more than the three-hour-a-day limit per week! However, this report also discovered that almost half of each age group — 90% in the 12-15-year-old category — also watched YouTube videos in addition to television. This raises another issue regarding children’s technology use: the variety. The innovations in technology has resulted in visual content being available on multiple platforms, not just the TV set. Consequently, making sure that kids are receiving the right amount of real-life conversation versus technology time is perhaps more difficult than first thought.

So, what do medical experts think about technology use and how this can affect a child’s ability to speak with peers in a face-to-face environment? Child psychologist at the Child Mind Institute in New York, Melissa Ortega, said that children use their phones as an “avoidance strategy” and can have trouble starting “those small talk situations”. Similarly, Dr. Jenny Radesky of Boston Medical Center, claimed that kids “learn by watching,” and suggested that if they aren’t taking part in physical socialisation, opting for screens instead, then they are not participating in crucial communication development stages.

Perhaps the use of technology is a double-edged sword with regard to socialising in youths.

It seems as though there are arguments for and against how technology affects physical fitness and a child’s ability to socialise. Technology is here to stay, so how do parents incorporate it safely into their children’s lives? Here are some tips on getting kids involved in activities to improve their fitness and social abilities:

It seems that technology has its good and bad points. However, it will always be important to get active and make time for socialising. If not overused, your child should be fine to engage with technology on a daily basis, perhaps just limit your child’s time and adopt some of the above tips to make sure that technology doesn’t adversely affect your child’s social or physical development.

Want to help your kids get active? Plan a visit to Chill Factore in Manchester to enjoy skiing, snowboarding and other fun snow activities on the UK’s longest indoor real snow slope. Contact us today for more information.