Is skiing or snowboarding easier? 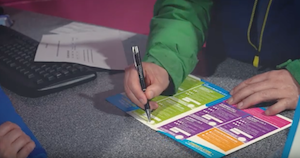 At Chill Factore, we get asked the same question dozens of times a day: ‘Is skiing or snowboarding easier?’ But the truth is, all of our experts are trained to a high standard in their chosen snowsport and can’t really give you a fair answer. So we decided to bring in a total beginner and train her up on both skiing and snowboarding over two consecutive days. From complete novice to the snow with absolutely no experience of either skiing or snowboarding, here’s Gemma Laverty’s account of the skiing vs snowboarding test!

Skiing vs snowboarding: Which is easier?

Prior to jumping into my skiing and snowboarding boots and giving two new sports a go, I was rather adamant that skiing would be the one for me and I wouldn’t be much of a boarder. My mum and dad used to be frequent skiers prior to me being born, year-on-year visiting Andorra – typical! For hereditary reasons, I thought skiing would be the one I would be best at.

As I have been on a segway twice and I’m quite the pro on those little hoverboards (if I do say so myself!), my preconceived idea of snowboarding was that it required being nifty on your feet and having good balance. Luckily, I felt like I could just about meet both criteria and could probably manage travelling around three metres before decking it. But, I still thought I’d feel more comfortable having independent control of both feet than having both strapped onto one board!

For as long as I can remember, I’ve always wanted to go on a snow holiday, especially when I hit my late teens – après-ski looked rather appealing! So, ahead of my arrival, I knew that completing a beginners’ course in both skiing and snowboarding could potentially lead to much bigger things, and I was already envisioning myself travelling down the slopes in France wearing my white salopettes!

Excitement and trepidation were two emotions running through my head as I headed down the M6 to Trafford Park. Within minutes of my arrival, having just walked through the chalet themed snow shops and a rather large area of white stuff peeking out in the distance, adrenaline really kicked in. Was I wearing the right gear? Going to fall over? Or was I even going to make it to the top of the beginners’ slope?! But hey-ho, as a complete beginner you have to start somewhere and because that’s the case, I might as well learn at the very best, Chill Factore– the UK’s largest real indoor ski slope!

Day One: Learning to board

After getting kitted up in Chill Factore’s changing village, I was introduced to my instructor, Ryan, and from the look on my face I think he quickly got the impression that I was a little bit nervous. Quickly making me feel at ease, he told me that I was going to be great! As I took my first few steps onto the snow, snowboard in hand, and feeling like I was in moon boots, this was when Ryan told me the first of many top tips about snowboarding. Tying your boots up securely was crucial, as all of the motion is in the legs and especially the calves!

I quickly discovered that I was orthodox, not ‘goofy’, was able to walk up the slope without sliding back down, and could even travel further than three metres without falling – result! It was now time to explore the travellator for my first time. I took little baby steps on my approach and made sure that Ryan was right by my side in case I epically failed! Before I knew it, I was stopping and starting on the beginners’ slope, doing turns and Ryan was showering me with high fives! Feeling like a pro, no sooner was I down the slope, I was then back up!

No word of a lie, I didn’t want to depart from my newly found friend – my snowboard! As I returned home, I was completely full of it, re-enacting the turns on dry land to my parents. At times, it was quite challenging and the turns required lots of thought to make sure I was leaning on my toes the right way.

It was safe to say, I couldn’t wait for the following day and to come up with my final verdict of whether skiing or snowboarding easier?

Brimming with confidence, I returned the following day, ready to tackle the snow with two new long feet. I raced straight through to Chill Factore’s changing village and threw salopettes, a ski jacket and gloves back on. I was then introduced to my ski instructor, Mikey, and this time there were no weary facial expressions in sight!

Mikey explained how to fasten my boots properly, clip into the skis and test my balance by leaning forwards and backwards in the skis. Like the day before, I learnt how to manoeuvre up the gradient without slipping and sliding and how to treat my skis like two feet, without them crossing over and getting me into a pickle. Before I knew it, I was back on the travellator and to the top of the beginners’ slope. This time, I was controlling my speed with the snow plough, bending and extending my legs a little further to slow the speed.

As I was progressing well, Mikey set himself a challenge, to make sure I visited the lower section of the main slope – bring it on! After a few more runs on the beginner slope, I was well and truly mastering turns and felt a tremendous sense of achievement when looking back up the slope and observing my perfectly parallel, snaking tracks!

It was now time to visit the main slope and perfect my beginner skills on the UK’s largest! Mikey firstly introduced me to the button lift and re-enacted the motion of the poma approaching, so I could hop on smoothly when it came to the real thing.

And so, here I was, once a beginner and now practically a professional (ahem!). Being dragged up the main slope several times and showing the whole of Chill Factore my snow plough, speed control and circular turns.

A tough decision. As it is very difficult not to confuse ease with enjoyment. But here’s the verdict…

Skiing was easier for me!

Although, I thoroughly surprised myself with snowboarding. With a couple more hours on the board, I think I could be up to the same level as skiing. As snowboarding is more challenging but, if like me, you love a challenge, give it a go! I spent the exact same amount of time snowboarding as I did skiing and as I mastered the big slope with skiing, having independent control of two feet, rather than having them both bound on a board, felt easier for me.

If you fancy hitting the snow for your own snowsports experiment, take a look at our lesson and courses pages for more information. You can learn to ski or snowboard in one day (just like Gemma did!) over two days or three weeks. Our beginner packages can be tailored to suit you and your lifestyle. Book today and find out for yourself if you find skiing or snowboarding easier!

How long does it take to learn to snowboard?

How to stay active while you’re self isolating

What size snowboard do I need?

What is the best snowboard for a beginner?